Ken Farrell, president of the pop-culture and collectibles firm, Just Kids Nostalgia, will mark the event with an online auction of Lennon ephemera and memorabilia.

Many of the items being offered are from the collection of photographer and Beatles fan, Paul Goresh. Goresh is famous in Beatle circles for having taken the last photographs of Lennon alive, and his unique photo of Lennon and his killer, Mark Chapman, was seen throughout the world in the days following Lennon’s death. That image was sold by Farrell’s company earlier this year for $36,800.
“We were honored that Paul Goresh’s estate selected us to sell his amazing collection,” said Farrell. “Now we have been given another opportunity to sell additional items from his collection.”

The week-long auction on eBay, starting on December 1st, will include some of the rarest original Lennon photographs offered in years. Both the “Beatles Years” (1963-1970) and the “Solo Years” (1971-1980) are well-represented. Works by important photographers such as Astrid Kirchherr and Dezo Hoffmann will be included in the literally hundreds of photographs and transparencies being offered.

Additional collectibles and ephemera will also be sold during the December event. A group of original AP press releases from December 9-10, 1980, a rare Lennon Halloween costume, a boxed Lennon model kit by Revell, a boxed Lennon doll, a twice-signed Lennon photograph, sealed Lennon albums, and many Lennon-related photographs from the archives of 16 Magazine are just some of the other items that will be sold.

The eBay auction will start at 5 p.m. New York time on December 1st and will conclude on December 8.
All items are being sold without any reserve price.

Just Kids Nostalgia has been a leader in the pop-culture collectibles market for more than 42 years, having held more than 100 catalog auctions and helped thousands of collectors build their collections. 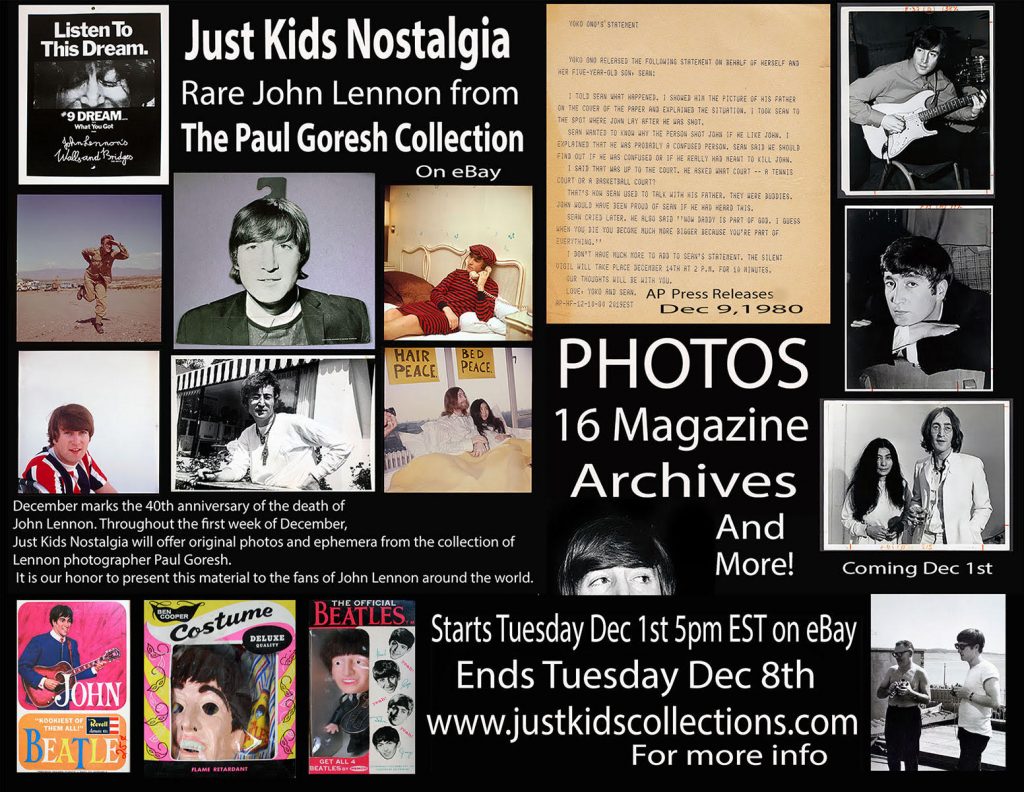