Paul Goresh will forever be remembered as the photographer who took the last photographs of Beatle John Lennon on the day he was assassinated in New York in 1980 by Mark David Chapman.

On December 8, Chapman and Goresh were waiting at the entrance of the Dakota Apartments where Lennon lived with his wife, Yoko Ono, and young son, Sean. At about 5 p.m. Lennon left for a meeting. Goresh, who had befriended Lennon over the last year was outside with his Minolta XG1 camera and Chapman stood nearby with a copy of John’s latest LP, Double Fantasy, hoping to get Lennon’s autograph.

The pictures that Goresh took early that evening would turn out to be the last photos of the beloved former Beatle, and one in particular would insure Goresh’s place in Beatle history. Five hours later, Lennon would return to the Dakota where Chapman was waiting. He would fire four shots at Lennon and the Beatle would die of wounds soon after at Roosevelt Hospital. 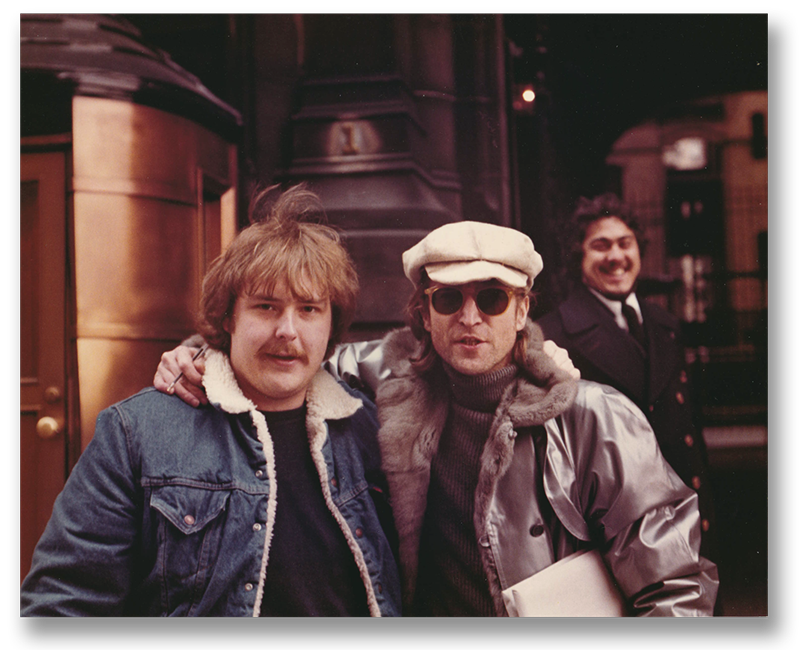 From the roll of film shot by Goresh earlier that evening, frame #19 is an image that includes both John Lennon and his killer, Mark Chapman. It would turn out be the only photograph ever taken of the two together. After appearing exclusively on the front page of the New York Daily News, the image would soon appear in newspapers and magazines throughout the world.

Before Paul Goresh died in 2018, he asked that dealer Ken Farrell of Just Kids Nostalgia handle the sale of his amazing collection after his death. “In addition to his unique photographs of Lennon, Goresh spent many years collecting Beatle memorabilia and the work of other photographers,” said Farrell, “and while his collection includes a wide variety of Beatle toys and autographs, it is his collection of Beatle images that rank it as one of the most important groups to come to market in many years.”

THE LAST PHOTOS OF JOHN LENNON
The Paul Goresh Photographs of December 8, 1980

Amateur photographer Paul Goresh will forever be known for the photographs he took of John Lennon on December 8, 1980, the day Lennon was murdered in New York City. 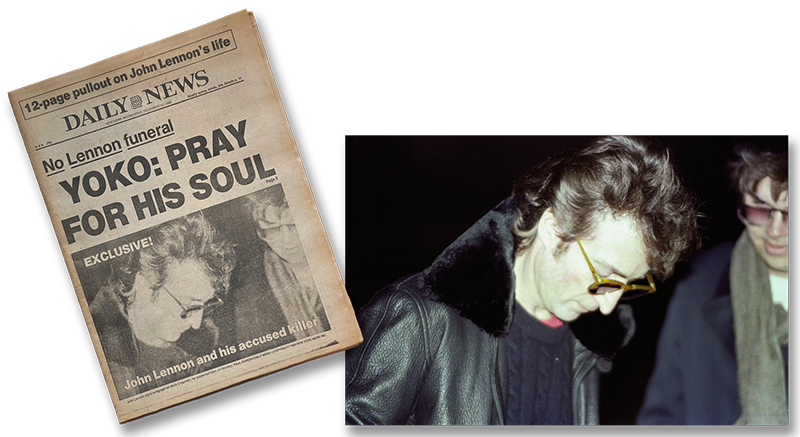 The original photo by Paul Goresh and its appearance on the front page of the New York Daily News issue of December 10, 1980. Image © Paul Goresh.

Earlier in the day, Goresh stood before the entrance of the posh Dakota Apartments, waiting for John and his wife, Yoko Ono, to leave as they headed for the Record Plant Studios in the Times Square area. John and Yoko emerged from the Dakota about 5 p.m. Paul was ready with his Minolta XG 1 camera and began shooting what would be the last pictures of John alive.

One of the exposures was destined to quickly become recognized throughout the world and would permanently connect Paul Goresh’s name to rock-n-roll history.

Another individual was also waiting at the Dakota for John…he carried a copy of John and Yoko’s latest album, Double Fantasy, released just a few weeks earlier. His name was Mark David Chapman and less than six hours later he would commit the unthinkable…the assassination of one of music’s most recognizable and beloved performers. 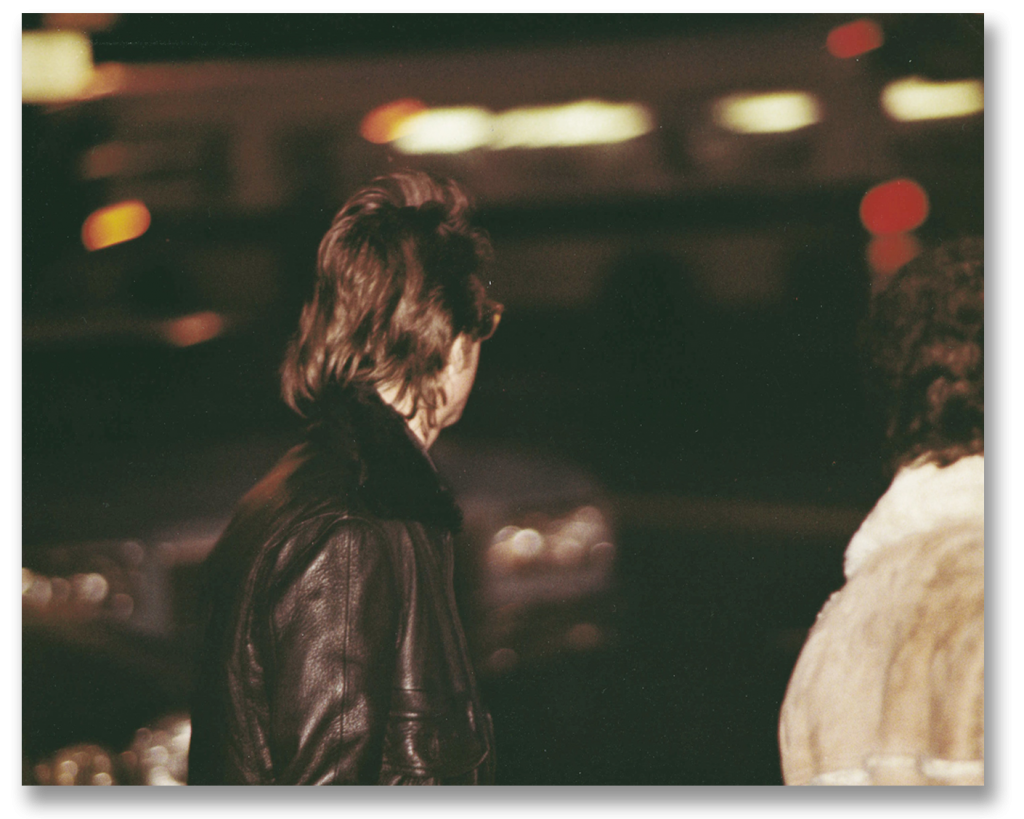 Single 35mm frame #13 from the roll of Kodacolor film shot on December 8, 1980. This is the earliest image from the group of “last shots,” and depicts Lennon from the rear shortly after exiting from his Dakota apartment. Moments later he would sign the Double Fantasy album for Mark David Chapman who waited nearby. The negative is accompanied by an 8”x10” color print made contemporaneously by Goresh. Image © Paul Goresh. The copyright for this image will be transferred to the successful buyer by the Estate of Paul Goresh. 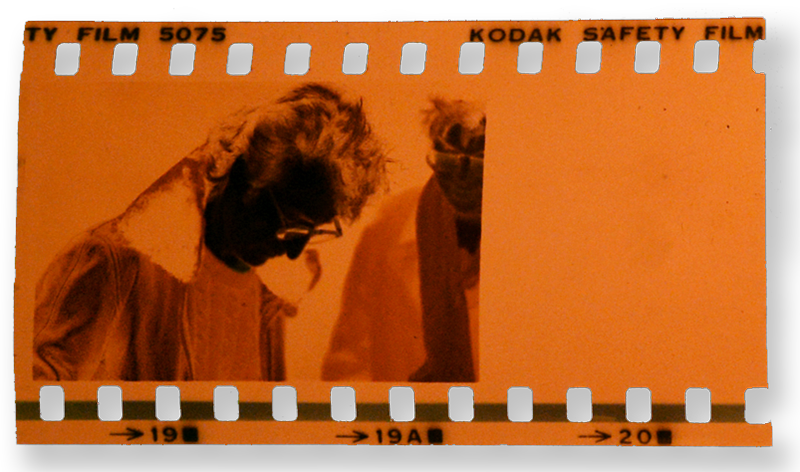 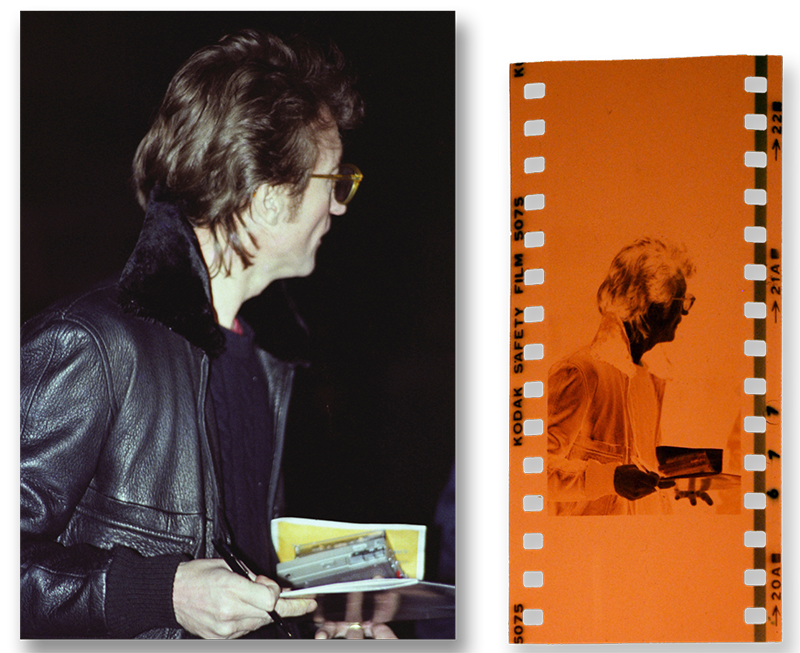 FRAME #19. The original Kodacolor negative taken by Paul Goresh of John Lennon with his assassin, Mark David Chapman on December 8, 1980.

Single 35mm frame #19 from the roll of Kodacolor film shot on December 8, 1980. Image shows John Lennon signing the Double Fantasy album for Mark David Chapman (at right) about five hours before Chapman would kill Lennon. This photo, the only one to picture Lennon and Chapman together, first appeared on the front page of New York’s Daily News issue of December 10, 1980, and would soon thereafter appear in thousands of publications throughout the world. The negative is accompanied by an 8”x10” color print made contemporaneously by Goresh. Image © Paul Goresh. The copyright for this image will be transferred to the successful buyer by the Estate of Paul Goresh.

Single 35mm frame #21 from the roll of Kodacolor film shot on December 8, 1980. This well-exposed image shows Lennon, still with autograph pen in hand, thus confirming it was most likely taken shortly after he finished signing the Double Fantasy LP for Chapman. The original negative is accompanied by a contemporaneous 8”x10” color print with numerous Paul Goresh handstamps on the reverse.

Image © Paul Goresh. The copyright for this image will be transferred to the successful buyer by the Estate of Paul Goresh. 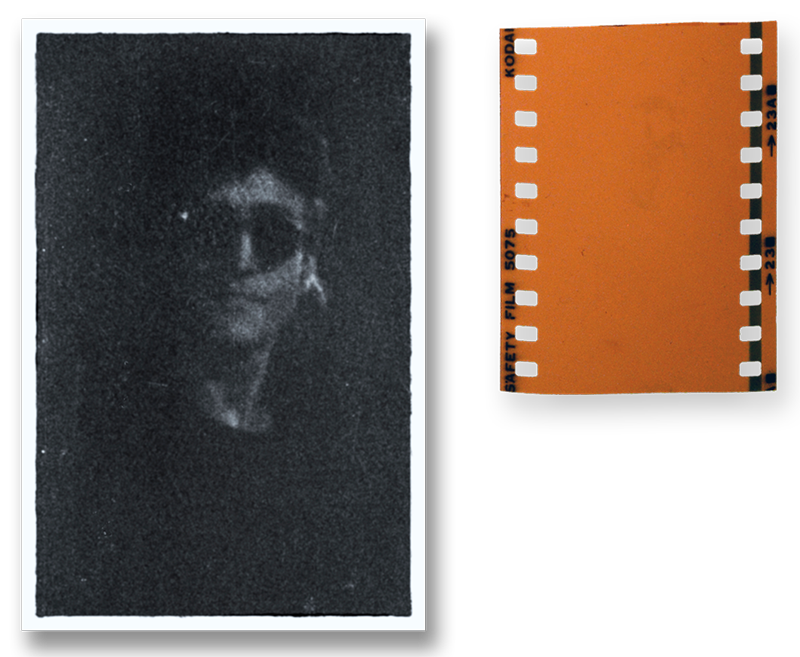 This negative, at first glance, appears to be blank. However using contemporary photographic techniques, the image of John Lennon can easily be enhanced. Goresh spoke about this image in later interviews, explaining the flash failed to go off. While the image is grainy, it is an oustanding portrait of John as he stares directly at the camera.

The copyright for this image will be transferred to the successful buyer by the Estate of Paul Goresh. 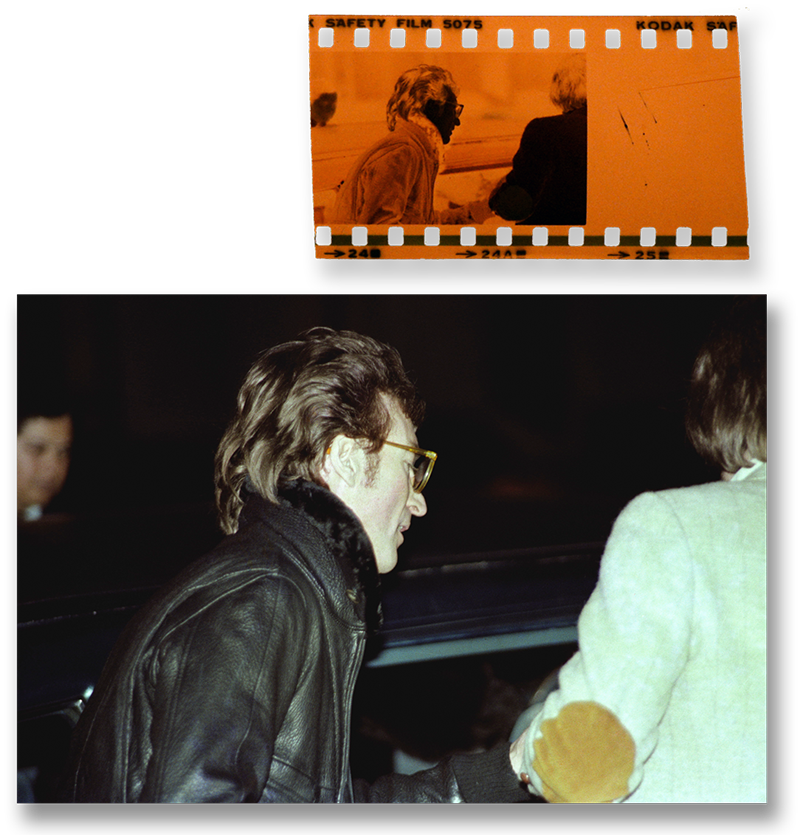 FRAME #24. Original Kodacolor negative taken by Paul Goresh of John Lennon on December 8, 1980. THE FINAL IMAGE ON THE ROLL.

Original 35mm color negative taken by Goresh on December 8, 1980. This well-exposed image from frame #24 shows Lennon about to get into his limousine. This image is the last one on the December 8 roll, thus confirming it to be the last picture of John Lennon alive. The original negative is accompanied by a contemporaneous 8”x10” color print with numerous Paul Goresh handstamps on the reverse. Image © Paul Goresh.

The copyright for this image will be transferred to the successful buyer by the Estate of Paul Goresh. 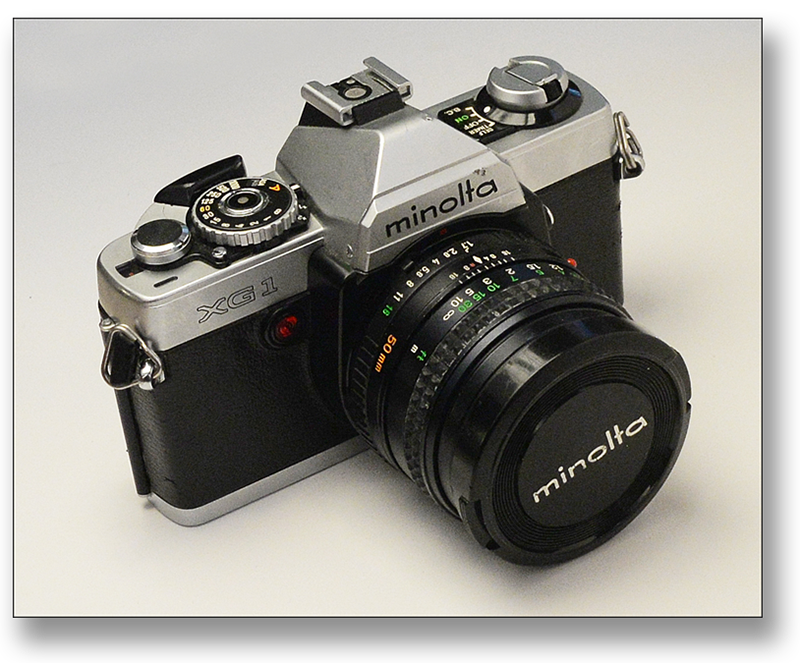 This is the iconic photo of John Lennon with Paul Goresh. Goresh had a huge enlargement of this image hanging in his home. The photographer was Michael Raybeck, another Beatle fan present that morning and, according to Goresh, it was Lennon’s idea to have someone use Goresh’s own camera to take the pictures. Included is the seven-image sequence and a contemporaneous 8”x10” photo with Goresh imprint on back. 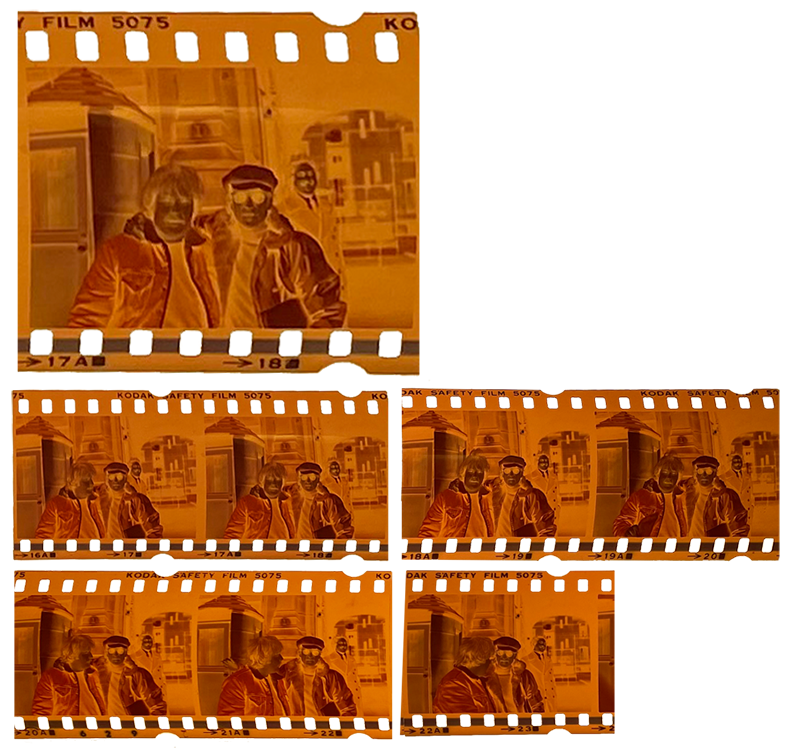 PAUL GORESH’S MINOLTA XG 1 CAMERA.
This is the camera Goresh used to take the last photographs of John Lennon, including the image with Mark David Chapman. Body serial # 7024652. Lens serial # 2782297. Goresh carried this camera with him for many years, telling interviewers that he purchased the camera for $379 at the old Two Guys discount store in Kearny, NJ. Accompanied by a Certificate of Authenticity from the Estate of Paul Goresh.

FRAMES #0A-6A. The original Kodacolor seven-image sequence by Paul Goresh of John and Yoko exiting a taxi on December 2, 1980.

This series of images was taken just six days before John was murdered by Mark Chapman.

The image of frame #4A was later selected by Yoko in 1983 to be used for an insert poster in the Nautilus re-release of their last LP, Double Fantasy. Includes an 8”x12” photograph made by Goresh.

All images© Paul Goresh. The copyright for the image from frame number 4A will be transferred to the successful buyer by the Estate of Paul Goresh. 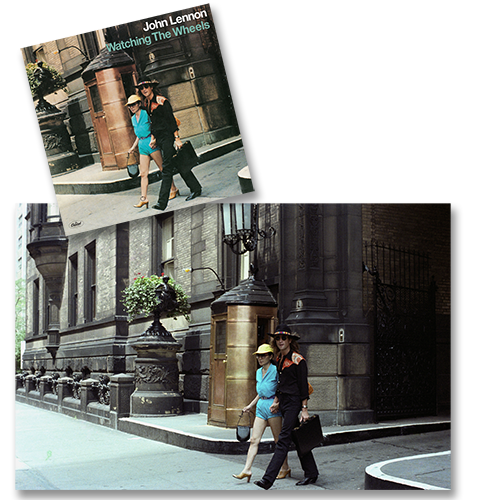 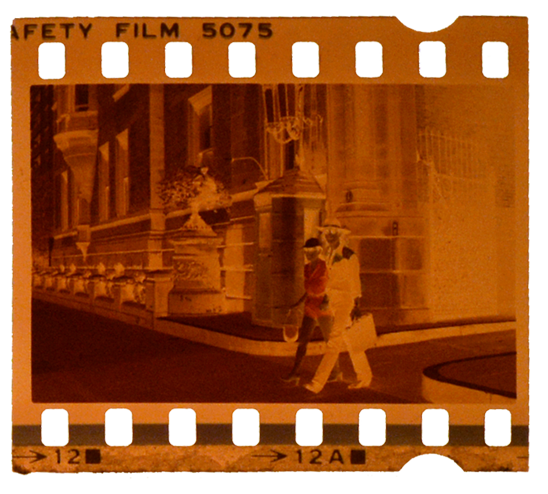 “Watching the Wheels” is a single by John Lennon released posthumously in 1981. The B-side features Yoko Ono’s Yes, I’m Your Angel. It was the third and final single released from Lennon and Ono’s album Double Fantasy.

Even though a professional photographer had been hired to take pictures that day for the record sleeve, John told Paul Goresh he could join in and take photographs, too. After John’s death, Yoko would select frame #12 from the 15 images Goresh recorded that day. The 15-frame sequence starts with John and Yoko emerging from the Dakota apartments and ends with the pair getting into a waiting limousine.

Call Us
This website uses cookies to improve your experience. If you continue to use this site, you agree with it.